We use necessary cookies to make our site work. We'd also like to set optional analytics cookies to help us improve it. You can disable these optional cookies below. Using this tool will set a cookie on your device to remember your preferences.

Necessary cookies enable core functionality such as security, network management, and accessibility. You may disable these by changing your browser settings, but this may affect how the website functions.

The Russian economy has been gradually diversifying away from oil and gas despite the massive and highly profitable production of hydrocarbons in the country.

Russian policymakers are rather conservative and, in principle, always want to have a balanced budget. In the period of rising oil prices (2000-2010) this target was easily achievable, as revenues were always ahead of spending. Alexei Kudrin’s idea of saving budget surpluses in the stabilisation fund - ideally maintained in foreign currency - gained a lot of traction as the fund, which reached 7% of GDP at some point, helped to smooth the impact of declining oil prices between 2015-2016 with no significant cut in social spending. As the economy becomes increasingly diversified and government spending the more disciplined, the oil and gas deficit (a hypothetical measure of the budget deficit without oil and gas taxes) narrowed from 10.5% of GDP in 2014 to 5.1% in 9M18.

While oil prices were high (around USD 100/bbl), the idea of using lower levels for budgeting purposes was not very well received, but when oil prices did go decline it came time to introduce a super-conservative approach to budgeting called a ‘budget rule’. The idea of the budget rule is to reduce the volatility impact of the oil price on the budget (and the economy) by planning government spending at USD 40/bbl for Brent Crude and sterilise excess liquidity in foreign currency to avoid the impact on the monetary base/local liquidity conditions. The rule itself was implemented in late 2016 when the 2017 budget was approved. At that time, we wondered what the impact on the currency market would be. Prosperity discussed these issues with the Central Bank of Russia’s top officials and they referred to the example of Norway, claiming that these operations were unlikely to have a serious impact on the actual level of exchange rate once the initial adjustment has taken place.

Whilst the CBR had planed to move to inflation targeting a long time ago, it finally announced its intention to do so in early 2015 as the wider government came to the  realisation that it would create longer-term price stability. Some lessons were learned from late 2014 whenthe CBR tried to defend the Russian ruble inside some range and lost a significant part of its reserves whilst the currency still devalued together with declining oil prices. If you cannot really control it, then why bothert trying? In reality, there is limited dollar debt in the economy (33% of GDP and largely just for exporters), imports are just 10% of consumption (more of capex of course) and so the transmission mechanism on CPI is 0.1, which is quite low. Having said that, the actual amount of oil and gas excess surplus in 2018 is a fairly high number compared to the actual current account surplus. According to the latest estimates, the budget surplus will close over RUB 3trn this year (3% of GDP), of which around RUB 2.5trn (around USD 40bn) will come from the oil and gas surplus. This is compared with estimated USD 100 bn current account surplus for 2018.

In the table below, we discuss oil and ruble values for last 12 months and try to make some conclusions;

Until January 2018, the Ministry of Finance was not present on the FX market - the ruble was freely trading. The average in September-December 2017 was USD 60 for Brent Crude oil and 58 for ruble against the US dollar. While the budget rule was already working (oil was above $40), MinFin did not purchase currency for technical reasons. MinFin started buying in January-March and with largely same oil price at around USD 65/bbl, whilst the ruble was also around 58. As such, we can conclude that the impact of FX buying was not significant.

In April 2018, US authorities announced its first serious wave of sanctions against Russian companies, including on Rusal and certain individuals, sending the ruble down from 57 to 61 to the US dollar against the backdrop of rising oil prices.

It seems, that international investors reduced their holdings of Russian sovereign ruble-denominated debt (OFZ) from 35% in April to 28% in July according to the  CBR. This was an equivalent RUB 500bn (around USD 9bn) of sales. As a reminder, during 2016-2018, the Russian state has been gradually increasing its fairly small borrowings (ruble-denominated OFZ) with foreigners buying roughly half of new issuances of state debt and with the total share of foreign holdings reaching 35% of the total RUB 7trn market in April 2018, up from 18% of the RUB 5trn market in January 2015. As such foreign holdings stood at RUB 2.2trn, up by RUB 1trn in 2.5 years. Not so much in absolute terms (USD 18bn) or in comparison with USD 450 bn reserves.

The market forgot about Rusal in the summer months as OFAC revised most of its harsh statements about possible restrictions of aluminium trade and almost provided a plan how to get the company off the SDN list. Rusal in the meantime published record Q2 profits as if nothing happened. At the same time, the Brent Crude oil price was fluctuating around USD 73/bbl in the summer months, whilst the ruble actually lost a little bit on MinFin buying of USD5-6 bn per month (an equivalent of 40-50% of current account surplus). Hence, there was probably some insignificant market impact in May-June 2018.

The equity, debt and FX markets in Russia were seriously disturbed in August when rumours about the possible inclusion of state oil companies, Sberbank and VTB to sanctions list broke. Unlike the Rusal action, this news was taken farth more seriously given the size and importance of these economic agents and the further potential global impactof such an approach. There was a further drop in the ruble, additional sales of OFZ by foreign holders and a decline in stock prices.

With two waves of US sanctions news and the Russian MinFin absorbing approximately 50% of the current account surplus in January-September, the ruble fell from 57 to 66 to the US dollar against a rising oil price.

A total of USD 40bn were added to reserves, which more or less corresponds to the actual change in reserves, adjusted for movements to exchange rates and the gold price.

At the same time one can see that as we write, the Brent Crude oil price is back to USD 62/bbl and the ruble is trading freely at 66 to the US dollar, so the correlation between the ruble and the oil price has declined significantly. This is a clear achievement of the budget rule and MinFin’s actions. How much of this loss in ruble value is from US sanctions and how much is from the budget rule is hard to say. It is likely mostly from sanctions.

Most importantly, the consolidated budget is balanced at USD 40/bbl for Brent Crude oil and MinFin will sterilise excess revenues in US dollars. Whilst MinFin’s mid-term projections are USD 60-65/bbl of Brent Crude oil and 60-62 rubles to the US dollar, policy suggests that the correlation between the ruble and the oil price should be kept to a minimum. At USD 60-70/bbl Brent Crude oil and 60-65 rubles to the US dollar everybody is more or less happy. Oil companies are making USD 15-18 EBITDA per bbl - even higher than the five-year average. The budget is balanced, the current account surplus is USD 60bn, inflation is 3-4%, growth is 1.5-2%.

At present, the stock market trading at a P/E 4.5x and with a DY 9%, whilst Russian long-term (8 years) OFZ offer 8% yield. The ruble is clearly negatively impacted by the sanctions newsflow and follow-on movements of the capital account. Hopefully, with the absence of bad news, this will gradually fade away and with USD 60-70/bbl Brent Crude oil, the ruble should get back to around 60-62 against the US dollar. It is important to keep in mind that inflation is around all time low levels and that there is not much cost growth in the economy.

In the meantime, one question that we are considering is the following; at USD 60/bbl Brent Crude oil and 67 rubles to the US dollar (or USD 70/bbl and 62 rubles to the US dollar; it does not matter so much), Russian reserves will be adding USD 50-60bn per annum and the budget for the next three years - even with all recent pro-growth initiatives funded by the VAT hike and pension age increase - will still be in surplus. How will the Russian state resolve this high-quality problem?

Lets consider the big picture. Economists often debate the ‘fair value’ of currency, whilst in case of freely-floating currency the answer is clear – it is on the screen. However, as part of a ‘big picture analysis’, we would like to draw your attention to the two charts below.  The first is a regression analysis of GDP per capita and GDP per capita expressed in PPP units, which is a result of IMF comprehensive study (albeit one where the last available data is 2011). 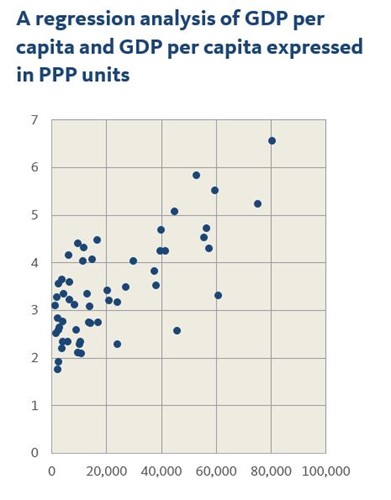 Another chart is a Big Mac Index against GDP per capita. Interestingly, this however did not prevent them from seeing serious devaluation against the US dollar over the last 8 years. Whilst PPP studies are very comprehensive and take into account a lot of cost elements of the economy, people also refer to more simple way to measure price difference – the Big Mac index, which is just a consumption measure. If one looks at the latter, with latest data available as of May 2018, Russia had just USD 2.08 against c. USD 10,000 GDP per capita - making it one of the cheapest out there. Hence, one can assume that the ruble is cheap and should appreciate, or that Russia should increase exports of beef and wheat. 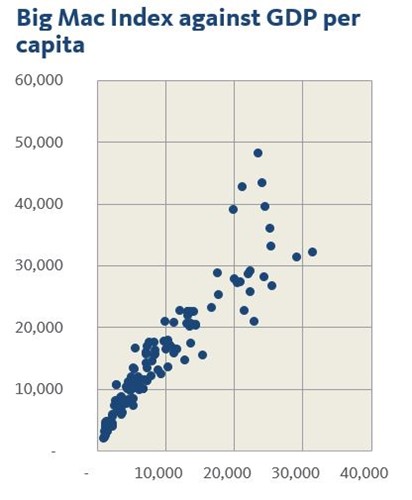 I am off to join my colleagues in our focused search for companies, which may stand to benefit from this trend and will halt our macro research for now here.